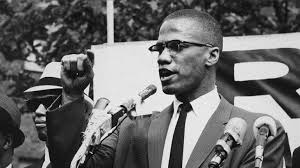 Malcolm X represents a side of Civil Rights that is shadowed by the peaceful resistance lead by the illustrious Dr. King, but is a side of history that every American should understand.

Born Malcolm Little, he led a fairly stereotypical life in his younger years: he lost his father to white supremacists; his mother was sent to a mental institution; he went into the foster care system; he was pushed out of his dream of becoming a lawyer and dropped out of school; at the age of 21. He was arrested and sentenced to 10 years in jail. During his imprisonment, Malcolm joined the Nation of Islam and traded his surname in for “X” to represent his unknown African origins.

After he was released, he became a strong activist for Civil Rights, but in a far more militant way than MLK’s movement. He stood for a portion of the community that felt fear to speak up for themselves and wanted to literally fight back. He was also a proponent of the Muslim-American community. The Nation of Islam grew from around 400 to upwards of 40,000 individuals through the efforts of Malcolm.

Malcolm broke from the NOI after speaking out against the extramarital affairs of its leader and his mentor Elijah Muhammad and converted to Sunni Islam. After a trip to Mecca, he reportedly returned with a different view on life and hoped to spread a new message of brotherhood. However, while preparing to give a speech, Malcolm X was killed after being rushed by three gunman from the NOI

While Malcolm himself never participated in violent protest, he was a proponent of a militant push for freedom. While today he isn’t hailed as a hero by the majority of historians, he spoke for a community in fear of losing its freedoms and demonstrated the lengths to which it would go to secure it.