Let’s talk about your trash recycling 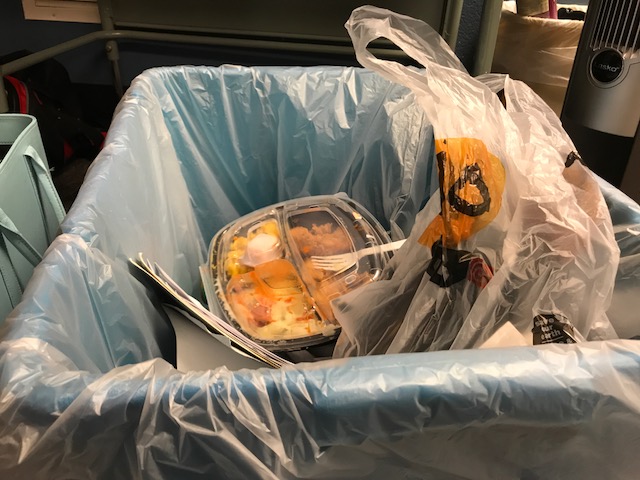 Students' left over lunches sit in the recycle bin, deeming all other recyclable items contaminated.

People across the globe are aware of the effects that plastic pollution can have on the environment. Videos and images of sea and land animals with their stomachs full of food wrappers and plastic litter social media feeds worldwide. But with generations who grew up learning about the “three R’s,” why is littering and pollution still as large of an issue? What can be done differently to prevent problems like this from continuing?

Teachers at Rocky received an email on Monday emphasizing the way that Rocky and Poudre School District as a whole needs to learn better recycling habits. The email focused on the fact that, while Rocky is equipped with various recycling bins throughout the building, many of those bins end up being dumped into the landfill because of contamination.

Students at Rocky need to remain aware of the things that they are throwing into the recycle bin and learn which items belong in the trash and which items are accepted for recycling. By throwing things such as containers with liquid into the recycling bins, it makes those bins contaminated and results in them being dumped into the landfill regardless of what other recyclable items were inside.

Gallegos Sanitation comes to take Rocky’s recycling twice a week. After speaking to Dean of Students Russell Stapleton and head custodian William Espinoza, it became evident that none of Rocky’s recyclables end up at the recycling center.

Each time that the recycling is taken by Gallegos it is deemed too contaminated to be taken to the recycling center and the entire bin is instead taken to the landfill. This means that even the items that were recyclables and were placed in the right bin were thrown away.

A follow-up email sent by Ben Johnson stated that,  “[The majority] of our students do NOT care about recycling.  They pick the closest thing resembling a plastic box an discard everything into it.”  And that for the students who do actively recycle, it’s obsolete because their efforts are often thwarted by those who aren’t concerned about what they throw into the bins.

This isn’t just an issue around the school district, The Coloradoan also published an article addressing the recycling issue as it becomes evident across Northern Colorado. Students need to try to be more aware as they throw things into the recycling bins at Rocky and at home. Containers with liquid in them need to be rinsed out before put in and food items should never be thrown into the recycle bins.

Rocky is a strong community and all students are capable of creating a positive change. Keep recycling, ‘Bos!